Peter, OK1DPX , gave me one MLA-S antenna for testing. This antenna was designed by OK2ER for a portable use on short-wave bands. The design is that of MLA-SMART series.

First, why a MLA? (Magnetic Loop Antenna). It is very suitable for short-wave bands as it is much smaller than full-size dipoles, verticals and directional antennas. One can locate it on a balcony or in a hotel room where it would not attract the attention of neighbors or property owners. Contrary to the opponents is not at all an „ersatz“. One can make interesting QSOs with it. It is quite compact, light-weight and easily transportable.

The MLA-S utilizes the innovative concept described in detail in [1]. Using the coaxial cable sheath as well as the inner conductor, and a novel circuit, it can cover the short-wave bands from 80 to 10 m in three ranges. Range switching is easily done by a jumper on the box containing the tuning capacitor (Figs. 1, 2). The jumper is either open or shorted, or has a capacitor in it. The tuning capacitor is a commonly used „low-voltage“ type which allows to use up to 30W RF power into the antenna. I have not seen any other MLA with such a wide-band coverage.

Mechanical design is simple, robust and light-weight. It uses common components and a low-cost design to the best result. One can disassemble it into a backpack, and carry it easily with 0.83 kg mass. The main loop of MLA-S is made of a good quality RG214 coaxial cable, its diameter is 75 cm, and the ends are connected to the tuning capacitor box by PL connectors (Fig.2). To fold it for transport the cable loop may be made in a small ring. An accurate tuning is accomplished by a reduction gear 3 to 1 on the capacitor, and the scale has 50 divisions. The unfolded 75 cm dia.loop can be shaped to a circle by hanging it by two strings attached to the cable rings, and to ahother ring on the vertical column (Fig.3). The column and its end are composed of five plastic parts made on a 3D printer. These 5 plastic parts are fitted together, so the column is easily assembled and disassembled.

The main loop is fed by the Faraday loop (FCL) with a BNC connector attached to the screw-adjustable ring which is positioned in height on the column (Fig.3).

My comments to the mechnical design:

The MLA-S must be located at some minimum height above ground. How to make it: 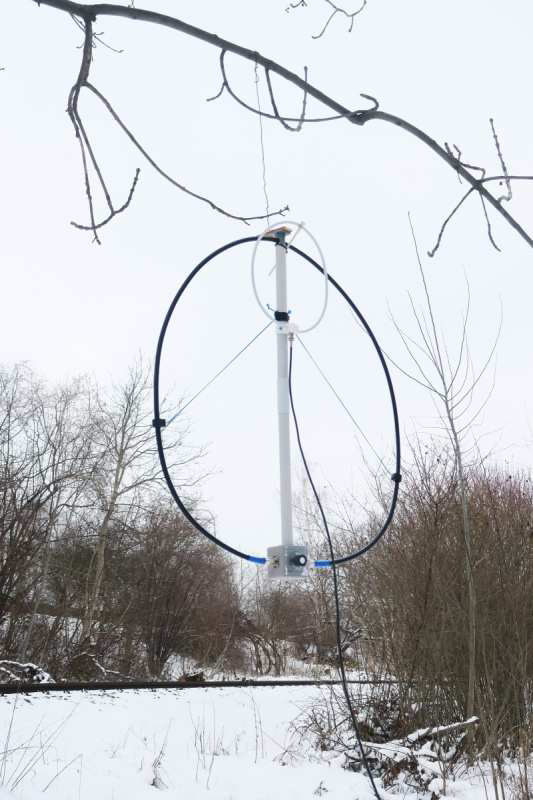 To measure SWR I used MFJ-259 B while MLA-S was located on a camera tripod inside a room in a panel apartment house, and as far as possible from all larger conductive objects like heaters, windows, refrigerator... I wanted to find out what are MLA-S frequency ranges, what a good SWR can be achieved, and what are band widths at individual ranges, for SWR limits of 1,5 and 2.0

As the solar activity was low I could try to use MLA-S only at 40 and 20 meters (I had no comparison antenna for 80 m band). I compared signal strength from the MLA-S with that of another verified antenna. I used a mechanical switch to feed the Kenwood TS-570D or TS890S.

The level on S-meter was converted to dBm by earlier taken correction curves. For S more than 9 it not necessarily holds that 1S = 6 dB as required by IARU. I have mainly used strong stations with S 9 or more at the reference antenna. This also rejected interfering signals to an acceptable level.

This way I tested that MLA-S survived the higher power without any damage.

The MLA-S is a folding antenna, extremely light-weight and easily transportable. The cost for its small size and an increased resistance of the main loop due to the PL connectors used for an easy disassembly is a poorer performance than that of larger MLAs. On the other hand, after a proper tuning at some frequency it may be mis-tuned without any deterioration of SWR. This is an avantage in an outdoor operation with a manual tuning. The reproducibility of tuning is so good that after pre-tuning at home (tuning capacitor and jumper, FCL position) the user can go in the field without a precise SWR meter. Some fine tuning at the spot can be done only by a SWR indicator like in the FT817. MLA-S can be operated even hanging on a tree branch.

While MLA-S has been designed as a compromise to be used in QRP portable operations, it is also well suited for use on balconies. It has a small size almost clandestine, so nobody around is disturbed. The maximum input power of 30 W is quite high for such use.

Along with the authors of [1] I would like to point out that the antenna should be tuned under a low power, and stay away from it at 5W.

In a suitable location, MLA-S performed almost equally well on a open veranda as it did on a flat roof at 14 Mhz. Its performance cannot be equalled with full-size dipoles or directional antennas like Yagi. With its small size its versatility over the full SW range is fascinating as well as it is easy to switch to another frequency range.

Operation testing was done by telegraph (CW) mode on 7 and 14 Mhz bands, and the results were quite impressive (DX 6400 km). Those who favor digital modes with a high redundance (WSPR- now FT8) can use a low power and antenna small size to achieve communication over larger distances than I did by telegraph.

I wish all owners a lot of nice QSOs and good experience!

Get free promotions every month!

Want to be informed about the news on this site, our discounts and new products? Do not hesitate to sign up for the newsletter.

Product has been added to your basket.